After it took us two hours to pack our backpacks, we finally left our beloved Surf Camp in Seminyak and went to the port in Sanur where we planned to take a boat to the small island Nusa Lembongan, next to Bali.
Well, since nobody could really tell us when the slow boats usually leave, we decided to take a speed boat and payed 200K Rupiah plus 25K Rupiah for our luggage. It turned out that the guy who grabbed our backpacks just took advantage of us – THERE IS NO LUGGAGE FEE.

Additionally, we found out that there is a Slow boat from Sanur to Nusa Lembongan departing every morning at 10:30am for only 100K RP!!
Just in case you are planning to go to Lembongan one day.
In order to get on the boat we had to walk through the water and climb on the small speed boat. The boat itself was quite crowded and there were only two seats in the front left. We sat down and after a while we wondered why the bag next to the captain moved and made strange noises. Turned out it was a chicken in a plastic bag. Not a big deal in Indonesia. 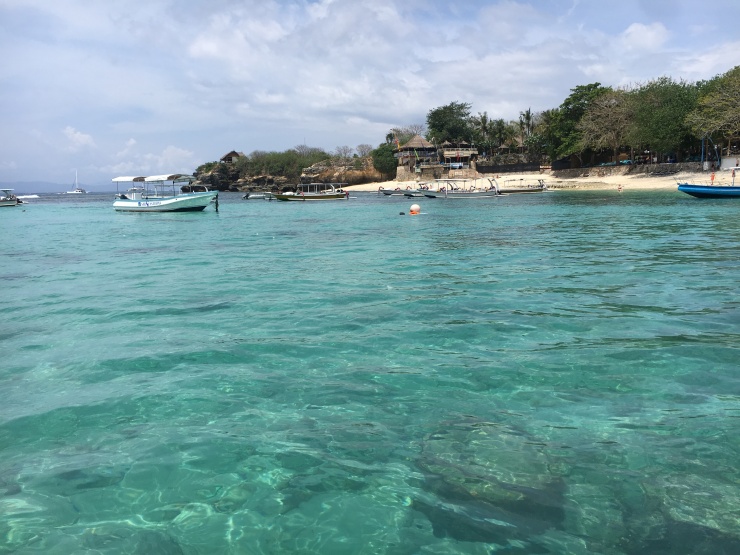 While wondering if chickens can get sea sick, I enjoyed the 30 minute ride through the crystal clear water. The water became more and more turquoise until we finally arrived in paradise.

When we arrived at the small port a Taxi driver convinced us that our hostel was quite far from the port and we payed 100K to get there. Hm, after a five minute drive to the other side of the island, we realised that that they screwed us AGAIN. 😁

The hostel was okay, it was a bit smelly, guess they had a problem with their drainpipes…
However, we spent the afternoon walking around and exploring the island by foot.
After a ten minute walk from our hostel we reached a big bay and could not believe our eyes – the water was gone.
To be honest, my first thought was „Damn, water always pulls back to the ocean when a tsunami is coming.“ but it was just low-tide. Anyway, it looked really cool, there were small boats stuck in the sand and kids playing in the middle of the bay.
We had lunch in a Warung and payed 50K for Nasi Goreng Vegetable, which is quite expensive for such a small island. We expected the food to be way cheaper than in Bali, but the prices were mostly the same, due to the tourism.

Later we found a very small lonely beach (thanks to Maps.me) where we took some pictures.
In addition, I realized again that Indonesia definitely has a waste problem, there is trash everywhere. Plastic bottles laying around between gigantic Banana trees and trash piles next to beautiful, lonely beaches.
Walking through paradise, breathing the fresh salty air, laying down under palm trees next to trash piles, it breaks my heart. 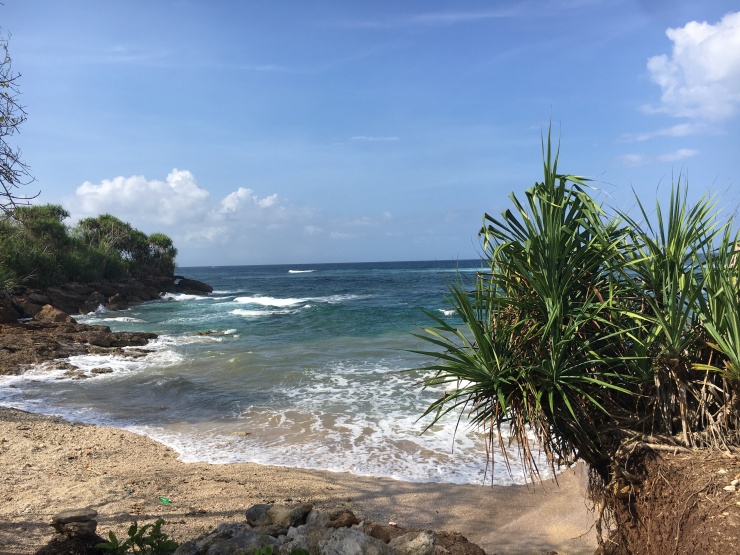 The next morning we woke up at 8am and walked to another beach, called „Dream beach“.
This beach belongs to a hotel where you have to pay 50K to use their showers and the infinity pool.
However, the current was really strong, the water turquoise and crystal clear, and nobody was there. At 11am we decided to walk back, since it got a little bit more crowded.
Don’t get me wrong, we’re talking ten people at the beach, which is almost nothing.

On our way back we found a PADI diving centre and booked a snorkeling trip for the next day.
Nusa Lembongan is very popular for its Manta Rays in the north of the island, but the conditions in the north of the island were not good for snorkeling that day so we had to pick another stop, which was in front of Nusa Penida.
We saw many corals and lots of fish, it was pretty cool but not as good as scuba diving of course.

We spent two days and three nights on this island and really enjoyed the silence and the lonely beaches.
On our last day we had dinner at Dream beach and watched the sunset.
However, we missed Bali and especially our Surf Camp a lot, so we decided to spend our last five days in Indonesia with Kima Surf.

The day after we took a speed boat around 8am back to Sanur, Bali.
Fortunately, we negotiated with the guy at the ticket counter and only payed 150K each and our camp picked us up in Sanur and we arrived early at the camp and enjoyed our beloved camp breakfast. 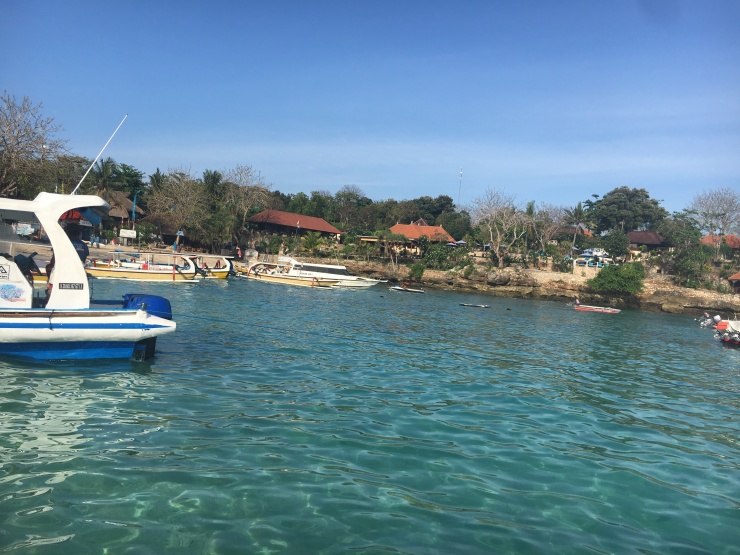 Over all, Nusa Lembongan is a nice island, perfect for diving, snorkeling and renting a scooter.
Next time I go to Bali, I will definitely visit the Gili Islands which are supposed to be magically beautiful.
Nevertheless, I can highly recommend visiting Nusa Lembongan and Penida, since these islands are not that popular and they appear to be like Bali fifty years ago. 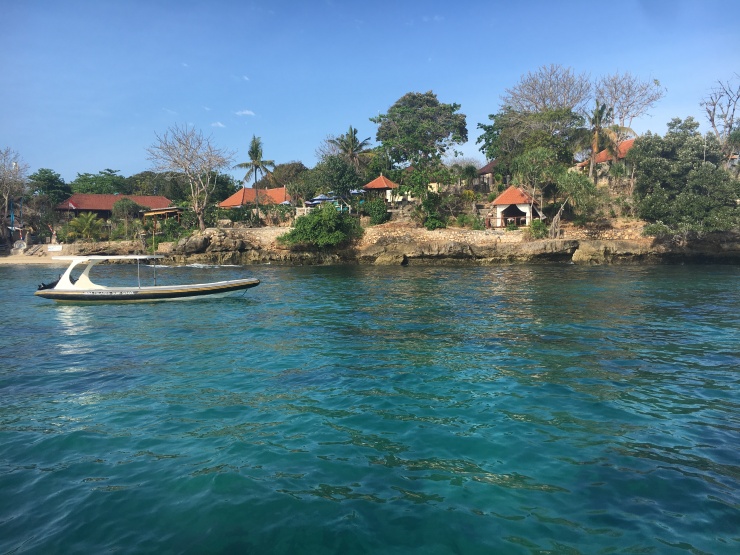 Thank you for reading my little Nusa Lembongan travel diary, these pictures were all taken with my phone by the way 🙂

Have a good week!
xx, Sophie

Golden Hour ☀️ #backhome #homesweethome #flowersinmyhair #summervibes #walkingonsunshine #happyme #familytime
„Wenn man sich selbst nicht mag, hat man den ganzen Tag Streit.“ - meine Nachbarin #goodvibesonly #smilemore #authentic #spring #plantsandflowers #rhododendronpark
No filter needed for this setting. 🌴Two weeks ago I decided to fly home earlier due to COVID-19. Looking back, I’m extremely glad that I’ve made this decision. Being in another country, on the other side of the ocean is really scary when you don’t know if you’ll be able to go home. When borders are being closed and flights get cancelled. I’m thinking of everyone who is still stuck in another country, unable to go home. I hope you’ll be back home safe very soon. #throwback #costarica #cahuita #caribbeansea #centralamerica #travel #travelling #solotravel #palmtrees #corona #covid_19
Can’t wait to go on long bike tours and explore new places. 🔜 #HAMBURG #movingaway #thisisthestartofsomethingnew #newbeginnings #biking #trek #triathlonprep #excited #bike
Dancing with the waves 🌊 #CostaRica #surfing #surf #rapturesurfcamp #waves #surfingcostarica #ocean #pacificocean #playaavellanas #surfcamp #happyme #loveit #takemeback #travel #solotravel #traveling #dancingonmyboard #surfboard #catchingwaves #centralamerica #guanacaste
Had a great time in Costa Rica, I’ve seen the Caribbean Sea, I hiked through the rainforest and beautiful national parks and I’ve surfed and was able to catch green waves by myself. Due to #Corona, I have to leave sooner than planned but I’m sure that I’ll return to Central America. Thanks #CostaRica for reminding me that travelling the world is definitely worth it. ♥️🌴🌊 #playaavellanas #centralamerica #surf #surfing #loveit #travel #traveltheworld #surfboard #beach #beachlife #traveling #solotraveler #happyme #goodtimes #pacificocean #exploremore